History of the Warburg Institute 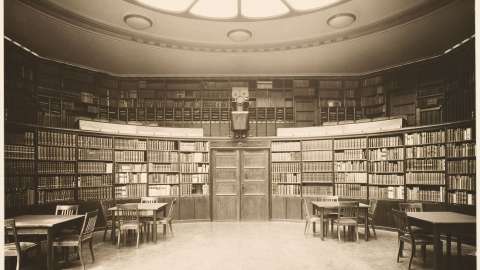 More pages in this section

WAR - In this section

Aby Warburg was the scholarly scion of one of Europe’s great Jewish banking families. Born in Hamburg, Warburg studied the history of art in Bonn, Florence and Strasbourg before graduating with a doctoral thesis on Botticelli's mythologies. Following Jakob Burckhardt, he came increasingly to feel the limitations of a predominantly stylistic approach to the history of art, and sought contact with the emerging Kulturwissenschaft of the anthropologists. The years succeeding his graduation were devoted to research in the archives of Florence, so as to build up a detailed picture of the intellectual and social milieu of Lorenzo de' Medici's circle. From this inquiry, Warburg was led to ask what the Florentines of his chosen period saw in antiquity, and why symbols created in a pagan context reappeared with renewed vitality in fifteenth-century Italy.

Thus he conceived the programme of illustrating the processes by which the memory of the past affects a culture, above all by analysing the pivotal role of images. The paradigm he chose was the afterlife, revival, survival or renewal of ‘antiquity’ on modern European civilization in all its aspects—social, political, religious, scientific, philosophical, literary and artistic. Maintaining his independence, including from antisemitic currents in German academia, became essential for Warburg’s scholarly identity.

When Warburg was 13, he had done a deal with his younger brother Max, trading the birth-right to the family business in exchange for any book he ever asked for. Thus began the collection that would become the Warburg Library in Hamburg. As the private collection grew—along with its importance as a resource for the city’s new university (founded in 1919)—a new building was created next to the family’s home: the so-called Kulturwissenschaftliche Bibliothek Warburg [KBW], with its famous elliptical reading room and its stacks devoted to Image, Word, Orientation and Action, opened in 1926.

Warburg also acquired a growing staff. Fritz Saxl (1890-1948) had joined Warburg in 1913 and it was he who deserves most credit for turning the library into a research institute in the early 1920s while Warburg was recovering from a psychosis triggered by World War I. Like Warburg, Saxl also taught at the University of Hamburg, where Erwin Panofsky and Ernst Cassirer were his colleagues. The publications which appeared under his editorship show how large was the circle of scholars whom he attracted and who helped to shape the Institute's outlook and traditions.

Saxl was joined in 1921 by Gertrud Bing (1892-1964), who was born in Hamburg and wrote her dissertation on Lessing and Leibniz under the direction of Cassirer. From 1924, when Warburg returned from Ludwig Binswanger’s Bellevue Sanatorium in Kreuzlingen, she served as his personal research assistant until his death and later edited his Gesammelte Schriften.

Saxl and Bing became life partners and worked together on the relocation of the Warburg Institute to London.

The Move to London

Warburg died in 1929, and, less than four years later, the Nazis came to power. The fact that the Warburg Library’s founder and many members of his staff and wider scholarly circle were Jewish meant that the Institute had to be evacuated: the family and its supporters were fast off the mark, and the people, collections and even furniture were all sent to England. In October 1953, Eric Warburg told the story of the transfer of the Institute to London—where, with the support of Lord Lee of Fareham and Samuel Courtauld, it was installed in Thames House in 1934, moving to the Imperial Institute Buildings, South Kensington, in 1937. In 1944 the Institute was given in trust by the Warburg family to the University of London, who would eventually build a permanent home for it, at the heart of its central campus in Bloomsbury, in 1958.

The Warburg Institute became one of the primary conduits for Jewish refugee scholars and curators (including Sir Ernst Gombrich, who served as Director of the Institute); and it is remembered and celebrated as the only cultural institution rescued from Nazi Germany to survive intact today.

"As the last member of the academic staff of this refugee Institute who came over from Central Europe during those dark years, I do not want the occasion to pass without expressing my sense of wonder and gratitude at the reception we were accorded. …If I have one wish for the future of the Institute it is that the intellectual courage [Warburg] showed in the questions he dared to ask will be emulated in the future, as it was emulated in the past by Saxl, by Frankfort, by Wittkower, by Kurz and Frances Yates, to mention only a few of those I was proud to count among my colleagues."

The Emblem of the Warburg Institute

The emblem, which appears above the door of the Institute, is taken from a woodcut in the edition of the De natura rerum of Isidore of Seville (560-636) printed at Augsburg in 1472. In that work it accompanies a quotation from the Hexameron of St Ambrose (III.iv.18) describing the interrelation of the four elements of which the world is made, with their two pairs of opposing qualities: hot and cold, moist and dry. Earth is linked to water by the common quality of coldness, water to air by the quality of moisture, air to fire by heat, and fire to earth by dryness. Following a doctrine that can be traced back to Hippocratic physiology, the tetragram adds the four seasons of the year and the four humours of man to complete the image of cosmic harmonies that both inspired and retarded the further search for natural laws.

The Trust Deed outlines the agreement between the Warburg family, the Warburg Society and the University of London. 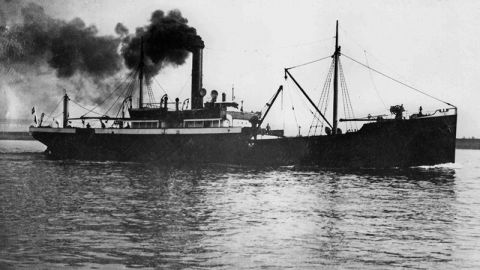 The transfer of the Institute