On 10 August 1905, Aby Warburg (1866-1929) sent a cablegram from Brussels to his wife, Mary Warburg (1866-1934), which read ‘good journey, arrived safely.’[1] The twofold aim of this trip was for Warburg to work at the Royal Library of Belgium and to attend the re-enactment of a historical tournament, as part of his research on artistic and cultural exchanges between Flanders and Florence in the fifteenth century. Along with several other events, some of which he also attended, the tournament was organised to mark the 75th anniversary of the independence of Belgium during the reign of Leopold II (1835-1909). From Warburg’s letters to Mary, it becomes apparent that the tournament’s organisers did not quite succeed in their ambition to resuscitate the past or, as they put it, ‘to bring the tournament to life.’[2]

In this blog post, Stephanie Heremans, an Occasional Student at the Warburg Institute and PhD candidate at KU Leuven, tells us more about Warburg’s activities and encounters in Brussels, and offers us an impression of what he witnessed there.

As early as November 1903, in one of his letters to Belgian art historian and physician, Jean-Jacques Dwelshauvers (1872-1940), who went by the pseudonym Jacques Mesnil, Warburg conveyed a longing to pursue research at the Royal Library of Belgium on the links between fifteenth-century Flemish and Florentine culture. Mesnil was a lifelong friend of his, a fellow Florentine in spirit, with whom he became acquainted in Florence around 1895. Warburg wrote,

It is rather a shame that you felt so ill-at-ease in the north, and especially in your own Belgium, because extracting more material from the Bibliothèque de Bourgogne would be, has to be, phenomenal for your art history. I profoundly regret that I cannot move to Brussels for ½ a year just once.[3]

In August 1905, Warburg eventually spent one week in Brussels, where he made use of the illuminated manuscript collection of the Dukes of Burgundy at the Royal Library. From his correspondence, we learn more about his own personal experiences there than about his scholarly findings. Again to Mesnil, he wrote, ‘there is a real need for improvement in the invigilatory staff; just like in Florence, all the trained staff disappear “al colpo di stomaco” at 12 o’clock.’[4] In two amicable letters to the library’s director, art historian, Henri Hymans (1836-1912), he criticised the poor work ethic and unprofessional conduct of the staff, mentioning a lack of organisation and watchful eyes in the reading room, as well as an employee’s alcohol-heavy breath after a long drawn-out lunch break. These specific – seemingly ‘petty’ – complaints were indicative of what seems to have frustrated him most, ‘I had the impression that it was insufficiently ingrained into the administrators just how precious the treasures are.’[5] In one of Warburg’s aphorisms, jotted down by his son Max Adolph (1902-1974), his annoyance about such malpractices in libraries wittily resounds, ‘The Bibliotheca Nazionale is no substitute for a bar.’[6]

Together with Hymans and the painter, Karel Mertens (1865-1919), Warburg went to see several flag-waving exhibitions, some of which were part of the jubilee of national independence, presenting the region’s artistic production, ranging from fifteenth-century tapestries, carved altarpieces and applied arts at the Exposition d’art ancien Bruxellois to a retrospective of nineteenth-century Belgian art.[7] Today, the Warburg Institute Archive still holds guidebooks to nearly every exhibition and museum collection he visited during his trip.[8] From these annotated guides and the letters to his wife, we can gather that he especially liked paintings by Constantin Meunier (1831-1905) and Mertens. Before meeting the latter in person, he wrote to Mary, ‘This morning, I saw the marvellously ostentatious Palais de Justice, and a wonderful picture by Karel Mertens, Peasants from New Zealand [sic], at the Mus. mod. [Musée moderne]. The only thing you have missed out on so far.’[9]

In his visitor’s guide to the Musée moderne, he noted one sentence in French – most likely something French-speaking Mertens had told him – which alluded to this painting as an image of the close relationship between nature and human life, ‘The earth offering up its golden children to life’s fleeting joy.’[10] In a letter to Mertens (dated 18 August 1905), besides thanking the artist for guiding him through an exhibition, Warburg once more expressed his admiration for the ‘intensity of the consistent attunement of human and nature’ in his early work and suggested that a temporary withdrawal from ‘modern life’ might have a restorative effect on the painter’s creative process.[11] One might say that Warburg was also looking for something of the sort in the historical tournament. To each his own: for the historian of art and culture, immersion in the atmosphere of a Burgundian courtly festival might enrich his research on exchanges between the North and South and cater to his ‘retrospectively directed lust for life.’[12]

When consulting the library of the Dukes of Burgundy, Warburg made the acquaintance of curator, Eugène Bacha (1864-1934). Through Bacha, he met the historian and archivist of the National Archives of Belgium, Joseph Cuvelier (1869-1947), one of the organisers of the historical tournament. Together they discussed the Flemish miniatures he was currently studying, and his research on a Florentine cassone panel (c. 1440) from the workshop of Apollonio di Giovanni (1416-1465), which depicts a jousting tournament in the Piazza di Santa Croce, of which he had brought a large (almost full-size) photographic reproduction with him to Brussels.[13] Cuvelier offered Warburg a ticket to the tournament (performed on 13 August 1905) and also invited him as a critical observer to the dress rehearsal, where he was able to speak with other key players behind the historical reconstruction, and examine up-close the costumes, armour, and weaponry used in it.

The opening scene of the tournament was the only part that involved a re-enactment of a historical event: a jousting tournament, held on Brussels’s central square on 20 February 1452, in celebration of the eighteenth birthday of the Count of Charolais, later known as Charles the Bold (1433-1477). Subsequent segments of the event were based on broader preparatory research on fifteenth-century tournaments undertaken by Cuvelier and his co-organiser, the army officer, Léon de Witte de Haelen (1857-1933),[14] and featured equestrian scenes (such as a passage of arms and a quintain), armed combat on foot with swords, lances, and hatchets, and a tournament with 531 participants as a grand finale.[15]

In letters to his wife, Warburg provided a complete account of what he had observed. As far as he was concerned, the organisers had failed to achieve their principal objective, that was ‘to offer a faithful representation of a chivalric festival at the court of Philip the Good.’[16] Characterising their attempt as scrupulous, yet naïve, and the outcome as ‘an illusion of the illusory,’ he wrote,

The fine, courteous colonel [Lieutenant Colonel de Witte], and the honest, clever archivist [Cuvelier], who so laboriously considers the illusion of an illusory world to be [the] ‘Renaissance,’ even down to the costumier and the banner painter, together display such refreshing verve in their attempts at reconstruction, that one grows fond of them precisely because they are so utterly incapable of authentically depicting the barbarically elaborate milieu at the court of Charles the Bold.[17]

Three key things impeded Warburg from travelling back in time: the benign representation of the Burgundian court’s milieu; the problematic depiction of historical dress; and the modern-day setting. Firstly, the measures put in place to avoid any serious violence (jousting lances were adjusted to bend at a certain point and, thus, their blows were blunted, for instance) resulted in an unsuitably good-natured atmosphere. Secondly, none of the female participants wore a hennin (a conical headdress); in other words, the symbol of the Northern costume style (which Warburg termed alla franzese) was absent. Thirdly, and allegedly for financial reasons, a large hall of iron and glass at the Parc du Cinquantenaire had been chosen as the backdrop for the tournament rather than the historic location of the joust of 1452 (the city’s central square). The hall had been commissioned under the auspices of Leopold II, as the park’s name suggests, for the fiftieth anniversary of Belgium’s independence.

Two days after the tournament, Warburg witnessed a grand historical parade passing through the streets of Brussels. The patriotic pageantry of the 75th jubilee was divided into two segments: the first part celebrated the region’s grandeur from the fourteenth century until Belgium’s independence in 1830; and the second part sang the praises of the country’s technological and infrastructural progress and its colonial expansion during the rule of its ‘philanthropic’ monarch.[18] In his correspondence, Warburg commented briefly on the event, which, he felt, had been ‘splendidly thought through and was effective in its overall impression.’[19]

Whilst Leopold II exercised only a limited amount of power in his increasingly democratic homeland, he was, until 1908, the sole ruler and private owner of the Congo Free State (1885-1908), a colonised territory roughly seventy-six times Belgium’s size. The national celebrations in 1905 proudly presented this colonial expansion as an integral part of the country’s history for the first time. Yet, during that same year, when reports and photographs of violence committed as part of the king’s brutal regime appeared in the international press more frequently, the Belgian government was forced by a commission of inquiry to recognise the atrocities.[20]

Although Warburg did not explain why, he remained ambivalent about his Belgian episode. After seeing the grand parade, he wrote, ‘I still do not actually know, whether I like Brussels or not.’[21] All the same, in his Brussels correspondence, in which he incisively critiqued the historical tournament as ‘a sham struggle over a romantic mock battle between princely tyrants,’ he did not mention the Belgian king, the other tyrant hiding in plain sight.[22]

Stephanie Heremans is a PhD candidate in Art History at KU Leuven. She is working on the project ‘Kairós, or the Right Moment. Nachleben and Iconology’ supervised by Professor Barbara Baert (KU Leuven) in collaboration with Professor Han Lamers (University of Oslo/KU Leuven). This research initiative deals with the reception of kairós in the visual medium from antiquity to the Renaissance by combining perspectives from classical reception studies and iconology.

* At the conference ‘Emotional Objects: Northern Renaissance Afterlives in Object, Image and Word, 1890s-1920s’ (April 2021, Warburg Institute), Stephanie Heremans will present a paper on Warburg’s comparative examination of the historical tournament’s re-enactment in Brussels (1452/1905) and the cassone panel (ca. 1440) from the workshop of Apollonio di Giovanni (1416-1465). A publication based on the conference is planned.

At the Warburg, we welcome applications from international students registered for a PhD in their own country to join the Institute as an occasional student. Find out more.

With many thanks to Helen Shiner for her translation of the excerpts cited from Warburg’s correspondence.

[14] To accurately reconstruct the actions, costumes and decoration of a fifteenth-century festival, Cuvelier relied on sources in the national archives, such as the Burgundian court’s account books and illuminated manuscripts, as well as the writings of courtier, Olivier de la Marche (1425-1502), fifteenth-century chronicles, and René of Anjou’s (1409-1480) treatise, Livre des tournois (c. 1462-1465). 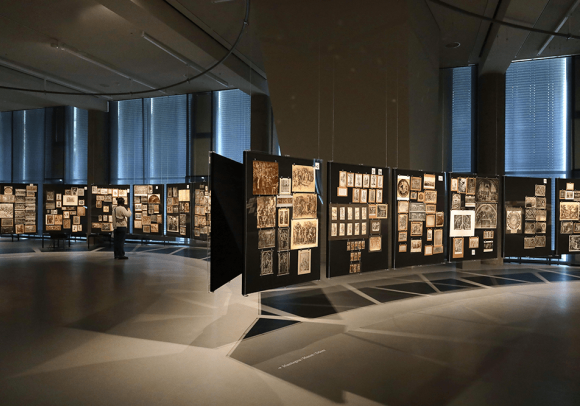 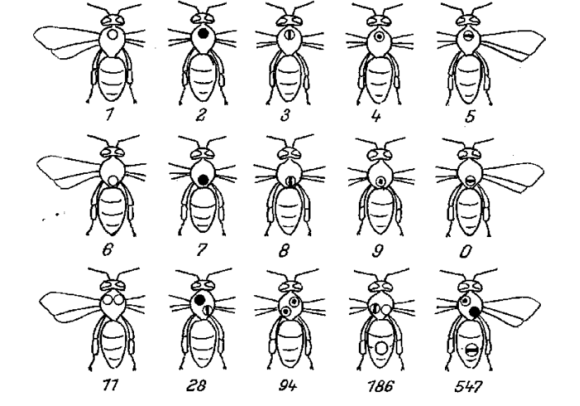 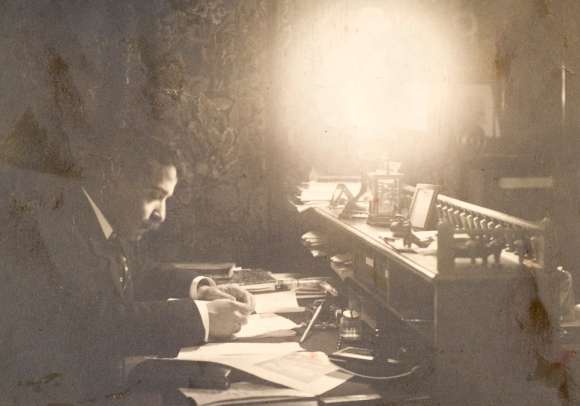