On the occasion of Ivorypress’ 25th anniversary, the Warburg Institute is thrilled to display one of their unique artist’s books: Sir Anthony Caro’s Open Secret (2004).

To celebrate the partnership between the Warburg Institute and Ivorypress for this exhibition, MA student in Art History, Curating and Renaissance Culture, Francisco de Borja Herraiz Garcia de Guadiana (who is also one of the curators of the display) met with Valerie Maasburg Director of Bookshop and Artist's Books Collection at Ivorypress to learn more.

What constitutes a book?

That’s kind of a trick question, because when we try to define what an artwork is we all know it is impossible. It seems that defining a book is obvious, because it is defined by having a spine, pages, and paper. But for us at Ivorypress it is not obvious at all. That’s exactly what our artists do; they push the boundaries of the medium of the book. An artist’s book brings together both of these questions, what is an artwork and what is a book, and then makes it absolutely impossible to find a definition. I will just say that artist's books tend to be artworks in book form.

How does Ivorypress select the artists they work with?

Elena, that's a very personal project of her’s that she started. I think—it's not that people send in proposals and we choose, rather that she follows an artist already and proposes to him or her to make an artist book.

How does Anthony Caro's Open Secret relate to the other projects Ivorypress has worked on before and since?

One parallel that I thought about lately is that when we talk about 19th century artist books, Livres d’artistes specifically, we think of luxury editions where the artists would illustrate the work of a writer. So in the 19th century we had all of these important editors collaborating with art dealers, and together they made these special editions which combined word and art together. It’s interesting that Anthony Caro was one of the first artist books Ivorypress published and then, little by little, the same thing that happened in the history of the artist book happened also in the history of Ivorypress. So the artists left the word behind and started to create a book from scratch without starting from a literary piece. And in this case, Caro doesn’t try to illustrate Enzensberger’s work, rather both create something that fits together or forms the artwork together.

Were there any challenges with the making of Anthony Caro’s book?

I would say it’s always something different when an artist creates an artwork, but in this special case it also was different in the way Caro worked with cut drawings, which normally [are] not used for books and made cardboard pieces. From these cardboard pieces [he made] a model in raw steel. And then he modelled this raw sculpture until he found the perfect shape for the book. It was also important that the book should open if you want to read it, so they found a solution for that at Marzorati Ronchetti in Italy. They made the [metal] sculptures there, not the grey card which was produced in London, and they also came up with a solution which is top secret nobody knows really how it works, but it stays open perfectly in the way the back of a car does.

Regarding the portfolio of poems by Hans Magnus Enzensberger, and the excerpt from Shakespeare’s 'The Merchant of Venice' - did Caro reveal why he chose those texts?

I don’t know exactly why he chose The Merchant of Venice, maybe somewhere in the archive there might be a note to that effect. But it makes sense for the use of the material because in the play there’s the story where there are three different chests and the suitor has to choose from the three chests the one that carries the portrait of the bride. So, if he chooses correctly, and he does, he can marry her. I think that is where the idea to bring in different materials came from. Why Caro chose exactly that quote from The Merchant of Venice, I do not know, but if you read it, it makes sense.

Caro and Enzensberger collaborated on Caro’s Last Judgement. Could you expand more on the relationship between the artist and the writer?

Let me just say that the artist book, when it was first conceived, the idea was not like it is now. The idea was that this, the book, would be a container for miniature sculptures that he’s made in the past. And then, while Caro and his studio  were working on it, the idea changed a little bit and —at a certain point— the idea came to ask a writer to collaborate on this piece. And that is when Elena asked Anthony Caro who he would like to work with and he said, “Hans Magnus Enzensberger.” We actually have the letter from the archive which shows this moment and it made perfect  sense because they had collaborated in this very important Last Judgement piece before and so successfully.

Where do you see the Warburg Institute and Ivorypress converging in terms of their missions, and how do you see both institutions complimenting each other?

Ivorypress is celebrating its 25th anniversary right now and in this context we are organising 15 exhibitions in different institutions and these institutions have been chosen to be museums, libraries, and universities. So, the Warburg is two of those, meaning that the Warburg is both a library as well as a higher education institution. Furthermore, the Warburg is soon to be all three, university, library, and  gallery/museum [with the upcoming Warburg Renaissance Project]. So it makes a lot of sense because it has all the elements we were looking for. The idea to place our artist's books in all these institutions is also to ask the question, where is the natural habitat for an artist book? Is it a museum? Does it need a gallery space to be shown? Does it fit more into a library? Obviously it is also a question that cannot be answered; it depends on the artist book. For example, we have conversations with very large institutions that are not only museums with large collections, but also contain libraries and sometimes when they are given an artist book to display they don’t really know where to put it. That’s what is so fascinating about this project - the new connections and questions that come out of displaying these artworks/books in new spaces. Some of the museums break down all those boundaries. The Warburg Institute is one of those.

Is there something to say too about an artist's book being placed among books about artists… and how that conversation can occur.

For sure it makes sense to show a book in a library. Even though it has sculptural elements to it. And even better a library in part dedicated to art and art history. It makes sense.

It is interesting because Caro was quite fond of Renaissance artists and the late Mediaeval and Renaissance era and its legacy is a key interest for us here at the Warburg Institute .

Yes absolutely. These are the sorts of connections that are so fruitful to the project. Our Olafur Eliasson book was shown in the Noise Museum in Berlin in the library of antiquities where they have the first papier in the world so that also makes sense. It’s all about showing connections and highlighting points of continuity and change.

> Find out more about the exhibition 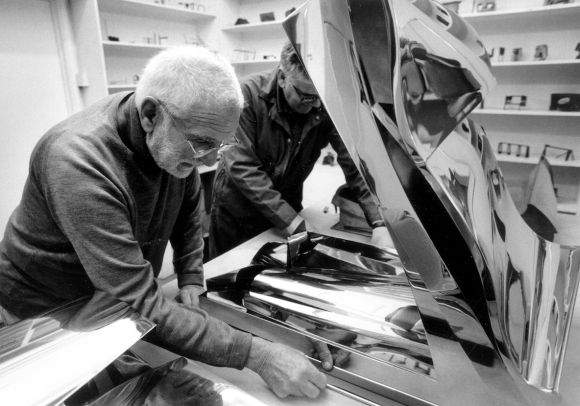 On the occasion of Ivorypress’ 25th anniversary, the Warburg Institute is thrilled to display one of their unique artist’s books: Sir Anthony Caro’s Open Secret 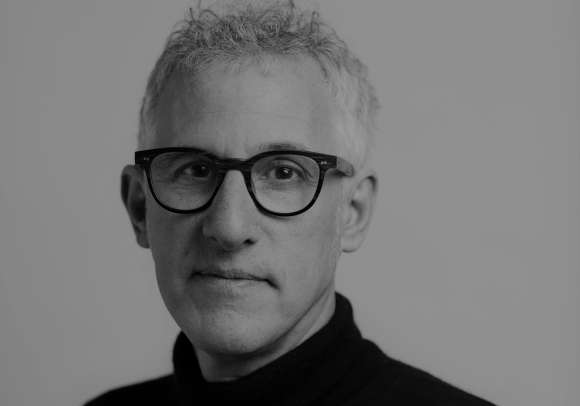 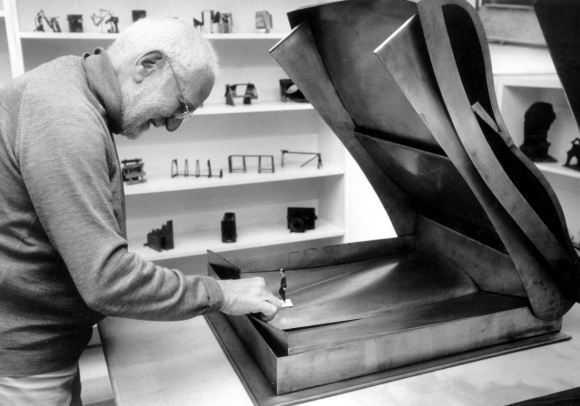