Beyond Cambridge: Feasting and Fasting in London and Los Angeles

The exhibition, Feast & Fast: The Art of Food in Europe 1500-1800, at Cambridge’s Fitzwilliam Museum, presents different approaches to understanding the history and culture of food and eating. Nearly 300 objects from the Fitzwilliam and other collections are on display telling the story of food in Cambridge, Britain, and Europe between 1500 and 1800. The exhibition curators, Dr Victoria Avery and Dr Melissa Calaresu, joined us to talk about the exhibition as part of our Curatorial Conversations talks, listen to the audio recording of the talk here.

In this blog post, the V&A’s Dr Tessa Murdoch discusses some of the cookery books that are on display in the exhibition. We also learn how the Warburg Library’s Elizabeth David bequest was consulted during the research of the exhibition and accompanying publication, Feast & Fast: The Art of Food in Europe: 1500-1800

Feast & Fast, the current exhibition at the Fitzwilliam Museum, Cambridge explores The Art of Food in Europe 1500-1800 and coincides with Advent 2019 and Lent 2020, annual periods of fasting in the Christian church calendar separated by the familiar feast of Christmas. This appetite-whetting show draws on the Fitzwilliam Museum’s collection with recreations of historic table-settings and displays by celebrated food historian Ivan Day including a repatriated large sugar sculpture of the palace of Circe after a design by Menon, La Science de Maitre d’Hotel (Paris, 1768), commissioned by the Getty Research Institute for their exhibition The Edible Monument, 2015, and in pride of place in a recreated late 18th-century confectioner’s workspace.

The accompanying publication, Feast & Fast: The Art of Food in Europe, 1500-1800, includes contributions from Cambridge curators, academics and beyond. In addition to a great deal of British material, there are many exhibits that were made in Italy, The Netherlands and France.

The publication recalls the experience of consulting Elizabeth David’s cookery books at the Warburg and the recently acquired Anne Willan and Mark Cherniavsky collection at the Getty Research Institute. My ongoing research on Huguenot refugee art and culture has led me to search for Huguenot recipes and evidence for Huguenot cooks in exile. Regarded as the 20th century’s ‘most influential cookery writer and scholar in English,’ Mrs David and I exchanged letters in 1985 about the Huguenot cook Vincent La Chapelle who worked in London and other European capital cities between 1726 and 1751. Mrs David informed me that in October 1728, Philip Stanhope, 4th Earl of Chesterfield wrote to Charles Lennox, 2nd Duke of Richmond in Paris, seeking assistance in finding a French master-cook for the British Embassy in The Hague. La Chapelle, recorded as ‘maitre d’école dans Grosvenor Street’, Mayfair in 1726, became head cook to Chesterfield to whom he dedicated his three volume The Modern Cook advertised by subscription in the London Daily Journal 2 June 1732 and published in 1733.

La Chapelle remained in the Netherlands and in 1742 entered the service of William IV, Prince of Orange as ‘Chef de Cuisine’ before moving on to Dresden, Lisbon and Paris. He returned to London in 1749. Then, as now, outstanding cooks were in international demand.

Cookery books in the Fitzwilliam exhibition include Receipts of Pastry and Cookery: For the use of his scholars (London, circa 1720) by Edward Kidder (1666-1739). Kidder taught at London cookery schools in Queen Street near St Thomas the Apostle and Furnival’s Inn, Holborn and gave lessons at private houses. Kidder’s 1739 obituary claimed that he had taught ‘near 6000 ladies.’ His 1720 Receipts reached a wide readership not only for cooks: Ivan Day maintains that Kidder’s designs for Lamb Pastey, Wilde Boar Pye, Florentines Torts and Pasties decorated with animals, birds and leaves, moulded, cut and applied, provided inspiration for the ceramicists and goldsmiths who supplied decorated vessels for elite dining tables.

Earlier cookery books shown in Feast & Fast include Bartolomeo Scappi’s Opera (Rome, circa 1570). It was the first to illustrate kitchens, pots and pans. Scappi, ‘Maestro dell’ arte del cucinare’ cooked for leading Cardinals in Rome and became head cook to Pope Pius IV and Pius V. The anonymous English manuscript ‘A noble boke off cookry ffor a prynce houssolde’, circa 1480-1500, acquired by the great jurist Sir Edward Coke, comes from the library at Holkham, Norfolk. A Proper newe Booke of Cokerye (London, circa 1558) from Archbishop Matthew Parker’s library probably belonged to his wife Mary for use in their Protestant household. A hundred years later, Robert May (1588-1664) in The Accomplished Cook (London, 1660) revealed his Catholic faith by integrating fish recipes ‘formerly used in Fasting days’ and dough made with almond milk instead of dairy products which were forbidden during Lent. May’s meat menus for feast days include ‘a Bill of Fare for Christmas Day’ consisting of 39 dishes in two courses from roast swan to goose jellies. Yet despite his Catholicism May included a recipe ‘to dress Eggs called in French A-la-Huguenotte, or the Protestant-way’:

‘Break twenty eggs, beat them together, and put to them the pure gravy of a leg of mutton or the gravy of roast beef, stir and beat them well together over a chafing-dish of coals with a little salt, add to them also juyce of orange and lemon, or grape verjuice; then put in some mushrooms well boil’d and seasoned. Observe as soon as your eggs are well mixed with the gravy and the other ingredients, then take them off from the fire, keeping them covered a while, then serve them with some grated nutmeg over them’.

May’s The Accomplished Cook was the most important English cookery book of the seventeenth century, ‘Approved by fifty-five Years Experience and Industry ..in his Attendance on several Persons of great Honour’.  May trained in France from 1598 but returned to London in 1605 where he served his apprenticeship, assisting his father who was head cook to the Dormer family at Ascott Park, Buckinghamshire. In the 1630s May was cook to Sir Anthony Browne at Cowdray, West Sussex and subsequently worked for other Catholic patrons Lord Lumley in County Durham, Sir Marmaduke Constable in Yorkshire, and finally for Lady Englefield, Berkshire. His portrait aged 71 facing the title page, proclaims that May supplied his patrons with ‘a whole Ark command of Natures plentie’. The 1685 fifth edition included a dedicatory verse extolling May’s ability to raise in paste ‘A compleat Fort, a Castle or a Tower’. Triumphs and Trophies in Cookery, to be used at Festival Times, as Twelfth-day, &c. included a ship and castle in pastry fitted with cannon – and gunpowder which were lit and fired at each other; a hollow pastry stag speared with an arrow (filled with claret) and two large pies with live frogs and live birds inside. A gentleman was invited to lift the lids of the pies ‘so flying birds and skipping frogs would cause much delight’ and make the ‘Ladies skip and shreek’. A lady guest was invited to pull the arrow from the stag so that the claret would pour out ‘as blood runneth out of a wound’.

By the late 17th century there was growing awareness of the importance of diet for health. Elizabeth Grey, Countess of Kent’s A Choice Manual Or Rare Secrets in Physick and Chirurgery (London, 1667) is believed by Anne Willan to have been compiled by Robert May whom she also employed. Medical recipes are also found amongst those collected by Sir Kenelm Digby, Chancellor to the Queen Mother, Marie de Medici whose Choice and Experimented Receipts in Physick and Chirurgery (reprinted in 1675) included the Huguenot doctor Sir John Colladon’s recipe for Oat Meal Pap. In The Good house-wife made a doctor…to prevent and cure most diseases by diet and kitchin-physick only (London 1692), Thomas Tryon (1634-1703) recommended a vegetarian diet as a healthy alternative to fish and flesh diets. Some cookery books were provided by leading doctors; Regent Doctor of the Faculty of Physick at Paris and of the Academy Royal of Sciences Louis Lemery’s  Traité des Aliments (Paris,1702) was published in London as A Treatise on Foods, 1706 (Willan Cherniavsky collection) and again as Lemery MD, A Treatise of all sorts of food, 1745 (Elizabeth David collection).

Elizabeth David’s Gastronomy Collection at the Warburg Library includes the 1736 edition of Vincent La Chapelle’s The Modern Cook in which he also takes account of the latest medical knowledge for the benefit of his new royal patron, William of Orange, who did not enjoy the best of health. La Chapelle borrowed heavily from Massiolot’s Le Cuisinier roial et bourgeois (Paris, 1698) which was reprinted (Amsterdam,1734).

Anne Willan’s collection, acquired over forty-five years, is celebrated in The Cookbook Library: Four Centuries of the Cooks, Writers and Recipes that made the modern cookbook (Berkeley: University of California Press, 2012). The Willan Collection includes one book formerly owned by Elizabeth David, Dissertation sur la Glace, Dortous du Mairan (Paris, 1749) which has her bookplate. 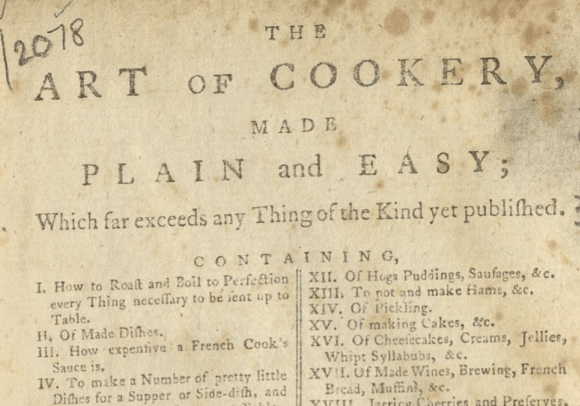 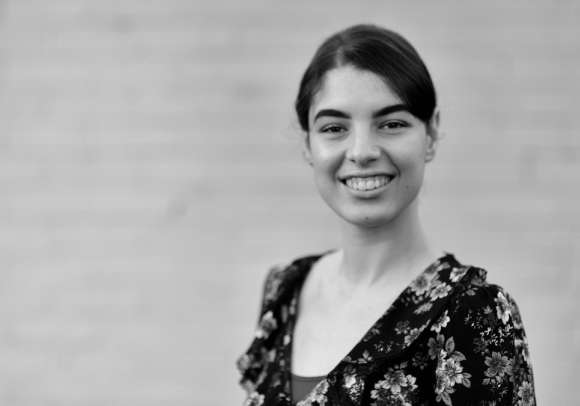 Life after the Warburg: Rita Yates 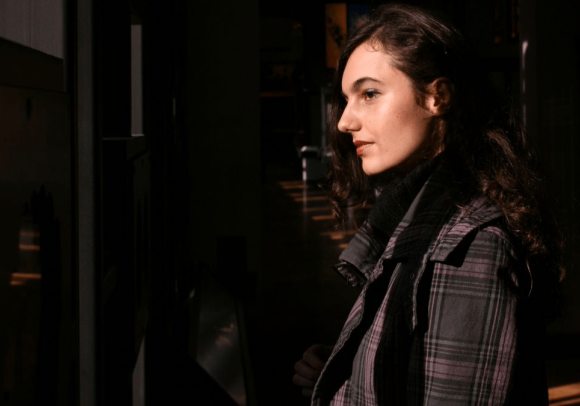