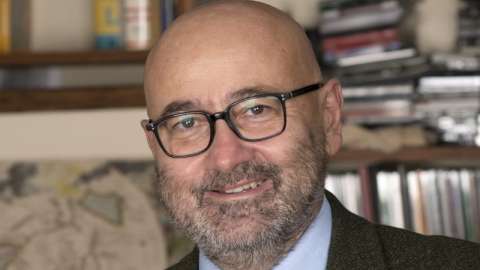 Alessandro Scafi is the author of Mapping Paradise: A History of Heaven on Earth (London-Chicago, 2006). He has worked on various aspects of the history of cartography and of pilgrimage, Aby Warburg, the relationship between the Italian and Hungarian Renaissances and on Italian art and literature, in particular on Dante and Aeneas Sylvius Piccolomini. He has also authored publications intended for a wider readership and audioguides for museums and exhibitions. He has been a contributor to a number of cultural broadcasts, newspapers and magazines. He has presented papers at international conferences and has given public lectures in many countries. Since 2011 he has run at the Warburg Institute (and since 2016 at the Italian Institute of Culture, London) with John Took a series of Dante public readings aimed at the general public.

History of utopias and political thought

Alessandro is interested in the history of political and utopian thought. He has researched a number of subjects related to medieval and Renaissance views of the relation between temporal and spiritual powers. He hasworked on the ideal city in the Renaissance as a secular paradise and the birth of the utopian genre in the early modern period. In this context he has devoted particular attention to Filarete’s ideal city of Sforzinda, papal art patronage in Church Jubilee years and the iconography of the heavenly Jerusalem in medieval and Renaissance art.

He is interested in human visions of divine perfection. He studied the diverse ways in which Christian scholars depicted the Garden of Eden on maps from Late Antiquity to the twenty-first century. He is now doing research on the ways in which between the Middle Ages and the early modern period Christian thinkers have imagined the perfect human body and sensual love in Eden – the primordial earthly paradise, an uncorrupted condition of perfectibility – or in the ultimate paradise in heaven – a stable condition of fulfilment.

Alessandro has a strong interest in the ways in which religion and geography intersect and interact, particularly in the context of medieval and early modern sacred geography and ideas about pilgrimage. He has been involved in a research project on pilgrimage practices in different Christian traditions and has focussed on pilgrimage through mental landscapes in the Roman Catholic tradition (at the monastery of Subiaco, Italy, in particular).

Dante and literature on journeys to the otherworld

He has a strong interest in Dante. He runs at the Warburg Institute and at the Italian Cultural Institute in London two complementary series of Dante public readings (with John Took), to introduce the general public to the beauty and complexity of Dante’s Divina Commedia and to explore some of the leading ideas of his work. In the context of his interest in medieval and Renaissance literature on journeys to the otherworld, he devoted particular attention to a little known text by Aeneas Sylvius Piccolomini, the Dialogus de somnio quodam.

He has done research on Aby Warburg: on his interest in musical iconography (a topic so far ignored by Warburg scholars), his views on artistic innovation and his involvement in World War I. Alessandro is interested in Warburg’s approach to the birth of opera as part of his study of the afterlife of classical antiquity and the relationships between the North and South of Europe. Dr Scafi has worked on Warburg's views on Dante, Arnold Böcklin and Gabriele D’Annunzio, and his approach to antisemitism and political propaganda.

His research interests include the role of money as symbolic sign of cultural identity and not only as a socio-economic tool to regulate exchange. He has done research on the design of the Euro, the Italian Lira and the Israeli Shekel considering the cultural, political and aesthetic aspects of the images featuring on banknotes and coins, within the broader perspective of the history of money and of numismatic iconography as well as political history.

Alessandro teaches the Term 1 core module, ‘Religion and Society in Italy’, which explores the religious context of the cultural, political and social history of Italy from the late Middle Ages to the Renaissance. The aim is to introduce the students to the complexities involved in a critical and unbiased assessment of the past.

In Term 2, he offers a module on how maps have served to order and represent physical, social and imaginative worlds from around 1200 to 1700 (‘Mapping Worlds: Medieval to Modern’). The focus is on the iconographic character of maps and the complex relation between art and science that is found in mapmaking throughout history.

In term 3, Alessandro supervises dissertation appropriate to his research interests and expertise.

‘Coping with Muslim Jerusalem between the Middle Ages and the Renaissance: Islam and the Holy City on Christian World Maps’, in Between Jerusalem and Europe: Essays in Honour of Bianca Kühnel, eds Renana Bartal and Hanna Vorholt (Leiden and Boston: Brill, 2015), pp. 257-279.

‘From Biblical to Non-Biblical Holy Places: The Holy Shrine of Subiaco as a Construct of Jerusalem’, in Visual Constructs of Jerusalem, eds Bianca Kühnel, Galit

‘Warburg and Böcklin: Myths in Word and Image’, in Towards a Science of Art History: J.J. Tikkanen and Art Historical Scholarship in Europe, [Taidehistoriallisia tutkimuksia (Studies in Art History), 38 (2009)] (Helsinki: Taidehistorian Seura, 2009), pp. 137-147.

Author and speaker of the audioguide for the exhibition Leonardo da Vinci, 1452-1519 Milan, Palazzo Reale, from16 April to 19 July 2015 (both Italian and English version).

Co-author and co-narrator of A Map of Paradise, ‘Between the Ears’ Falling Trees Production for BBC Radio 3 (broadc. 24 May).

Author and narrator of Il paradiso in terra (“Heaven on Earth”), 20 radio broadcasts on travels of exploration, journeys to paradise, visions of paradise throughout the world. Rai, Radio Due: Alle otto della sera.

Author and narrator of Il Mistero Trinitario nell’Arte (“The Mystery of Trinity in Art”), a three-year cycle of 56 broadcasts on the representations of the Trinity in European art Vatican Radio.