Research Interests: Medieval to Modern Book History | Shakespeare and Renaissance Drama | Travel Writing | Textual Transmission and the Theory and Practice of Editing | Word and Image | Magic and Science | History of Espionage and Cryptography 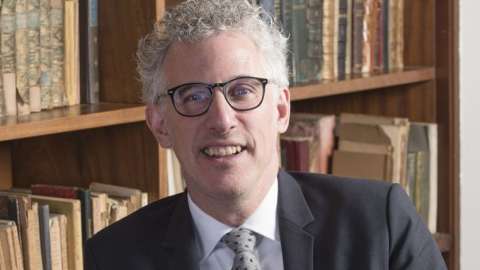 Professor Bill Sherman earned his BA from Columbia University and his MPhil and PhD from Cambridge. He was founding director of the interdisciplinary Centre for Renaissance and Early Modern Studies at the University of York, and he moved to the Warburg from the Victoria and Albert Museum, where he served as Director of Research and Collections and head of the V&A Research Institute (VARI). Bill has held visiting positions at Caltech, Keio University and Queen Mary University of London and fellowships from the Folger, Huntington and New York Public Library. He sits on many editorial and advisory boards: he was Associate Editor of Shakespeare Quarterly for more than a decade and is currently Series Editor (with Ann Blair) of Oxford-Warburg Studies and a member of the Advisory Boards for the Huntington Library Quarterly and British Art Studies. He was one of the judges of the Art Fund’s Museum of the Year prize for 2019 and Chair of the judges for the city of Hamburg's Aby Warburg Prize in 2020.

Bill Sherman's research has been driven by a love of archives and other collections, and by an interest in how objects from the past come down to us and speak across time and space. Trained in literary criticism, textual studies and the theory and practice of editing, and drawn from his undergraduate years to textual representations of travel and magic, he has edited several major plays from the Renaissance period, including Shakespeare’s The Tempest, Jonson’s The Alchemist and Marlowe's The Jew of Malta.

He is best known for his work on the history of books and readers, particularly his pioneering work on marginalia and the history of libraries. That work began with his PhD dissertation on John Dee’s reading practices and culminated in a popular overview of the field called Used Books (2008), which recovered a culture in which writing in books was not only tolerated but taught, and in which annotations and other readerly interventions were tools for making books memorable, beautiful and/or useful. It also pointed the way to his current book project on The Reader's Eye, which explores the relationship between annotation and illustration.

Much of Bill's current research explores the interface between word and image, the relationship between knowledge and power and the surprising connections between the modern and the early modern. He recently published Hollywood Arensberg, a collaborative reconstruction of the art- and book-collections of Walter and Louise Arensberg who, in the first half of the 20th Century, assembled one of the most important private collections of art in the United States (including most of the surviving work by Marcel Duchamp), as well as the world’s largest private library of works by and about Sir Francis Bacon. His long-term scholarly work focuses on the history of cryptography, connecting the Renaissance science of ciphers with its modern legacies in everything from textual bibliography to the advent of digital computers. This is the subject of his 2021 Oxford Wells Lectures.

Bill contributes to postgraduate teaching on the History of the Book and the Techniques of Scholarship. He also supervises MA and PhD dissertations related to his areas of interest and expertise.

Renaissance Collage: A New History of Reading, edited with Juliet Fleming and Adam Smyth as issue 45:3 of the Journal of Medieval and Early Modern Studies (Fall 2015)

Ben Jonson’s The Alchemist (with Peter Holland), in The Cambridge Edition of the Works of Ben Jonson (Cambridge: Cambridge University Press, 2012)

Prison Writings in Early Modern England, edited with William J. Sheils as issue 72:2 of the Huntington Library Quarterly (June, 2009) [Winner of the inaugural Voyager Award from the MLA's Council of Editors of Learned Journals for the year’s best journal on an early modern topic]

The Tempest and its Travels, edited with Peter Hulme (London: Reaktion Books, and Philadelphia: University of Pennsylvania Press, 2000)

John Dee: The Politics of Reading and Writing in the English Renaissance (Amherst: University of Massachusetts Press, 1995)

Selected Articles and Chapters in Books

‘In the Margins of Josephus: Two Ways of Reading,’ with Anthony Grafton, in Joanna Weinberg and Martin Goodman (eds.), The Early Modern Reception of Josephus, a special issue of the International Journal of the Classical Traditions (2017)

'A New World of Books: Hernando Colón and the Biblioteca Colombina,’ in Ann Blair and Anja Goeing (eds.), For the Sake of Learning: Essays in Honor of Anthony Grafton, 2 vols. (Leiden: Brill, 2016)

‘The Beginning of “The End”: Terminal Paratext and the Birth of Print Culture,’ in Helen Smith and Louise Wilson (eds.), Renaissance Paratexts (Cambridge: Cambridge University Press, 2011)

‘Patents and Prisons: Simon Sturtevant and the Death of the Renaissance Inventor,’ in William Sherman and William Sheils (eds.), Prison Writings in Early Modern England, a special issue of the Huntington Library Quarterly 72:2 (June 2009), 239-56

‘On the Threshold: Architecture, Paratext, and Early Print Culture,’ in Sabrina A. Baron, Eric Lindquist, and Eleanor Shevlin (eds.), Agent of Change: Print Culture Studies and the Legacy of Eisenstein (Amherst: University of Massachusetts Press, 2007), 67-81

‘The Century That Wrote Itself,’ presented by Adam Nicolson, BBC Four, 10 April 2013