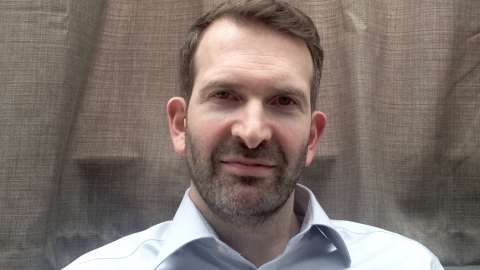 Caspar Pearson is Director of Studies. His work focuses on the art and architecture of the Italian Renaissance, as well as historiography and the afterlives of the Renaissance in later periods. He is particularly interested in images and writings regarding cities, in the relationship between representation and place, and in Renaissance theories of architecture and urbanism. He also writes about aspects of contemporary architecture and visual culture, especially in relation to the European Union. He joined the Warburg Institute in 2020.

Caspar has published widely on the Renaissance architect and humanist Leon Battista Alberti, focusing particularly on Alberti’s theoretical writings and his ideas about cities. Caspar’s work on Alberti explores the relationship between architecture and power, as well aesthetic theories in the Renaissance period. In doing so, it touches on issues as diverse as the use of shipwreck as a metaphor for architectural and cultural collapse, exile, the tension between ‘natural’ order and cultural contingency, giganticism and monstrosity, and efforts to bring architectural and pictorial thinking to bear on discussions about domestic and social ordering. He is currently completing a new biography of Alberti. Simultaneously, he is engaged in projects on the representation of cities in late fifteenth-century Italian painting, and the significance of the theme of ruination in Early Modern English drama.

Caspar also engages with the afterlives of the Italian Renaissance, exploring how architects and other thinkers in the modern and contemporary periods have responded to the legacies of Renaissance architecture. His work considers historiographical debates, including the modern framing of the Renaissance itself, and questions about the place of the Renaissance in history, as well as architects’ reactions to history as an active force that might be harnessed or excluded from their works. He has a particular interest in Europe and the European Union, exploring the EU’s architectural and visual culture and considering the various ways in which architects, artists, and politicians have sought to utilise European history and culture to forge a project for the present and the future. In this regard, he has written about displays relating to Europe at the Biennale di Venezia and about the ways in which both art that has been made in response to EU initiatives and other types of imagery deriving from different sources have been used to comment on issues such as borders, migration, and the imagination of national and supranational entities.

Caspar teaches the Term 1 core module, Art History and Renaissance Culture: Image to Action, which introduces students to some of the subject matters of art in the period 1300-1700 and the methods and approaches taken to put them into context, making use of key primary and secondary sources held in our library.

The Chameleon’s Eye: Leon Battista Alberti in Perspective (in press with Reaktion Books).

“The Return of the Giants: Leon Battista Alberti’s Letter to Filippo Brunelleschi,” Journal of the Warburg and Courtauld Institutes, LXXXIII, 2019.