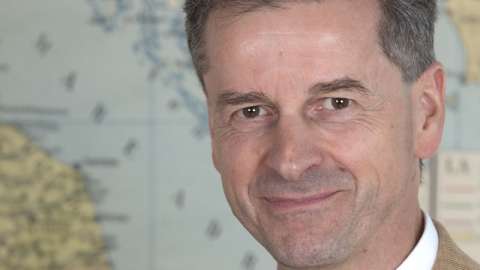 Eckart Marchand studied History of Art at the Universities of Berlin, Bonn, and Basel, where he completed his PhD in 2000. He was Occasional Student at the Warburg Institute from 1993 to 1997 part-time lecturer at City University from 1995 to 2000. He also taught in the History of Art Department at UCL (1998-99, 2001-03), and was Director of the UCL History of Art Summer School (2003). From 2003 to 2007 he was Lecturer in Italian Renaissance Art at the University of Reading. He joined the Warburg Institute Archive in 2008 and was Acting Archivist in 2010/11. Eckart also contributed to the edition of Vol. III.1 (Lectures and Essays) of Aby Warburg's Gesammelte Schriften (forthcoming) and, since 2014, is presently a member of the Project ‘Bilderfahrzeuge: The Legacy of Aby Warburg and the Future of Iconology’.

For his doctorate, Eckart studied the representation of gestures in fifteenth-century paintings of saints, famous men and in portraiture, engaging with issues such as patronage, the status of the artist, requirements of devotional practices, and patterns of pictorial composition. This research has been published as "Gebärden in der Florentiner Malerei: Studien zur Charakterisierung von Heiligen, Uomini Famosi und Zeitgenossen im Quattrocento" (Münster 2004).

Presently he is working on the use of plaster casts in artists’ workshops from 1400 to ca. 1800, looking at Renaissance Italy, seventeenth and eighteenth-century France (with a particular interest in the role of the Bâtiments du Roi), and at British late eighteenth century sculptors in the context of the Grand Tour. In this context he has also edited several journals and sketchbooks of the British Neoclassical sculptor John Flaxman for the 2010 volume of the Walpole Society.

Having worked for years in the Warburg Institute Archive, Eckart has also published on Aby Warburg with a particular focus on Warburg’s engagement with the reproduction and display of images in two and three dimensions

‘The Materials of Ephemeral Sculpture in Renaissance Italy’ in The Art and Language of Power in Renaissance Florence: Essays for Alison Brown, edited by Amy Bloch, Luca Boschetto, Carolyn James, and Camilla Russell, (Centre for Reformation and Renaissance Studies: Essays and Studies 42); Toronto, 2019, pp. 251-269.

Eckart Marchand and Alison Wright (eds), With and Without the Medici: Studies in Tuscan Art and Patronage, 1434-1530, Ashgate Publishers, Aldershot 1998