Curator of the Photographic Collection 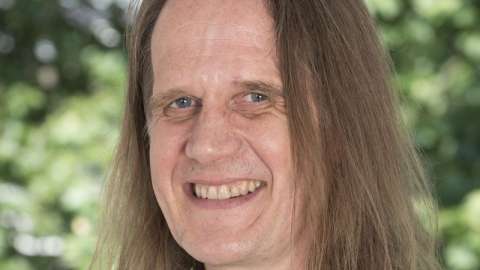 Dr Paul Taylor studied for his BA at Cambridge University, where he read Philosophy (Part I) and History of Art (Part II). His PhD was also at Cambridge, supervised by Jean Michel Massing. He has worked in the Photographic Collection since 1991, and is one of the Editors of the Journal of the Warburg and Courtauld Institutes. Paul also supervises PhDs, teaches (though not every year) on the MA course, and publishes research. In the past decade Paul has been invited to deliver lectures and to speak at conferences in the Netherlands, Belgium, Germany, Austria, Poland, France, Switzerland, Italy, the United States, Mexico, Argentina and China.

Paul's PhD was on Dutch flower painting in the seventeenth century, which was published as a book and led to an exhibition on the theme, at Dulwich Picture Gallery. Out of the thesis there grew an article on the concept of ‘houding’ in Dutch art theory, which led Paul to specialise in the terminology of art in Dutch in the seventeenth century. He has also published two articles on Rembrandt’s Night Watch, and another on his early history painting in Leiden, the subject of which has long generated controversy.

Paul has published a number of articles devoted to individual Dutch words which were of importance in the art terminology of the seventeenth century, such as ‘houding’, ‘gloeyend’. ‘ordinantie’ and ‘vlak’.  His work in this field led to being invited to give the first Hofstede de Groot lecture at the Netherlands Institute for Art History; the aim of this lecture series is ‘to spotlight art historians who have conducted pioneering research on Dutch art’. In recent articles his work has expanded into comparisons between Dutch, French and English art theory.

In the Photographic Collection Paul's day-to-day work involves answering queries about iconography, and he has taught the subject both at the Warburg and at Birkbeck.  He has published articles on iconographic themes in the work of Michelangelo, Raphael, Peruzzi and Rembrandt. At present he is writing a history of ‘representation’, which in the technical sense in which he uses it is close in meaning to ‘iconography’. The aim is to write an account of the emergence of iconographic types, such as fetishes, idols, narratives, portraits and scientific images.

In the mid-1990s Paul ran a seminar on world art, and in the Photographic Collection he has initiated sections on Mesopotamian, Egyptian, Asian and Non-Eurasian iconography. He has organised and published colloquia on Mesopotamian cylinder seals and on the question of whether (global) iconography is possible without texts. Paul has also written on the concept of the primitive in the work of three Warburgians, Aby Warburg, Henri Frankfort and Ernst Gombrich. The book on which he is currently working takes a global approach.

On a sabbatical during which he intended to write a book on the concept of ‘technique’ in the visual arts Paul became fascinated by the question of how paintings change in appearance as they age. Paul therefore switched topic and wrote his book Condition: the Ageing of Art. The book is intended for art historians, but conservators too have welcomed it; David Bomford, the former Senior Restorer at the National Gallery, wrote in the Burlington that, ‘As an introductory text, it is difficult to imagine how it could be bettered.’

In Term 2 Paul sometimes offer a module called ‘Artistic Intentions’, a survey of early modern European art and art theory by theme. There are classes on  Condition, Imitation, Perspective, Composition, Drawing, Proportion, Expression, Draperies, Colour and Light and Shade. The class is not offered every year, and unfortunately will not take place in 2018-2019.

Paul is willing to supervise PhDs on any area of early modern art theory, or on iconography.

The Visual Culture of Holland in the 17th and 18th Centuries and its European Reception (ed., with Jacek Jaźwierski), Lublin: Wydawnictwo KUL, 2016

Meditations on a Heritage. Papers on the Work and Legacy of Sir Ernst Gombrich (ed.), London: Paul Holberton publishing, 2014

‘From Mechanism to Technique: Diderot, Chardin and the Practice of Painting’, in Knowledge and Discernment in the Early Modern Arts¸ eds Sven Dupré and Christine Göttler, Abingdon: Routledge, 2017, pp. 296-316

‘Gombrich and the Idea of Primitive Art’, in Meditations on a Heritage. Papers on the Work and Legacy of Sir Ernst Gombrich, ed. Paul Taylor, London: Paul Holberton Publishing, 2014, pp. 90-108

‘The Glow in late sixteenth- and seventeenth-century Dutch paintings’, in Looking through paintings: the study of painting techniques and materials in support of art historical research, ed. Erma Hermens, Leids Kunsthistorisch Jaarboek, 11 (1998), pp. 159-75