Sarah works on late medieval visual culture, particularly that related to diagrams, technology, and time. She is interested in the intersections between the histories of art and science, the history of the book, and the digital humanities, primarily in the context of teaching with museum and library collections. 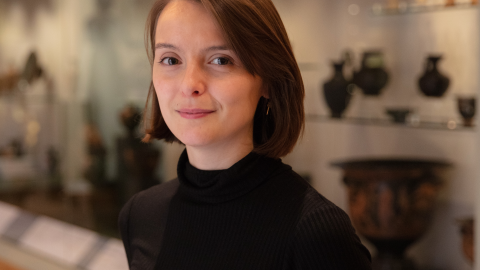 After studying her BA at the University of Cambridge and MA at the Courtauld Institute, Sarah wrote a DPhil thesis at the University of Oxford on the diagrams of Opicinus de Canistris (1296–c. 1352). She has held research fellowships at the Huntington Library, Fondazione Giorgio Cini, and Staatsbibliothek zu Berlin, and worked in a curatorial capacity at the Metropolitan Museum of Art and Winchester College. Her exhibitions have covered a variety of topics, including European exploration 1400–1600, the collections of Thomas Browne, the Moon, German woodcuts, early colour-printing, and science-teaching collections in the 19th and 20th centuries. Her work often incorporates digital methods of presentation and research; at the Oxford Internet Institute, she worked on ‘Cabinet’, an online platform pioneered by Oxford researchers and to facilitate the use of objects and images in teaching.

Sarah’s research is driven by close collaboration with museum and library collections. At the Warburg she is studying how, in late medieval Europe, multiple systems of time co-existed and how they can be deciphered through material culture. Considering a wide variety of time-keeping objects—including manuscripts, folded objects, scientific instruments, and astronomical clocks¬—she is testing the hypothesis that a network of scholars existed that created new calendrical forms around northern Italy, Austria, and southern Germany in the fifteenth century. By working with nearby collections, she is conducting an interdisciplinary analysis of a selection of late medieval calendars to follow this network and, ultimately, to re-evaluate how time was understood following the diffusion of mechanical-horological instruments.

Sarah is also interested in the use of digital tools in museums, particularly those that support object-based learning and engagement through virtual exhibitions. Her curatorial projects often include digital components, a selection of which can be viewed here.