Tillmann Taape is a historian of science working on the intersections of medicine, alchemy, craft knowledge, and the printed book in the early modern period. After obtaining his PhD from Cambridge University, he was a postdoctoral researcher at the Making and Knowing Project at Columbia University. Tillmann has held fellowships at the Max Planck Institute for the History of Science, the Herzog-August-Bibliothek in Wolfenbüttel, and the Huntington Library. At the Warburg, he is exploring the visual culture of distillation. 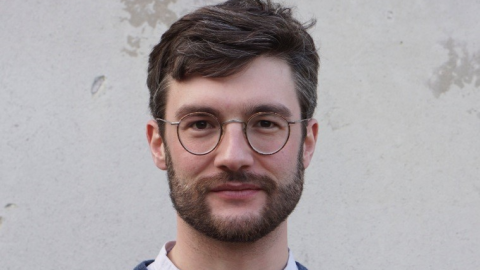 Even during my undergraduate degree in Natural Sciences, I was drawn to the history of knowledge. I obtained my PhD in History and Philosophy of Science at the University of Cambridge in 2017, with a thesis on Hieronymus Brunschwig, an early sixteenth-century surgeon and apothecary who wrote some of the first practical books on medicine in the vernacular. I am currently working on a book about Brunschwig that shows how his books combined learned ideas with artisanal skill for a new vernacular readership. It contributes an important and quietly influential voice to the history of science and medicine: that of a well-read artisan who challenges his contemporaries’ (as well as modern historians’) ideas about what could be known, how, and by whom.

My interest in craft knowledge and its intersection with learned science took me to the laboratory of the Making and Knowing Project at Columbia University, where we developed new ways of teaching and researching the history of science and material culture through hands-on reconstruction and produced Secrets of Art and Nature in Renaissance France, a digital critical edition of our core text, Ms. Fr. 640, a French manuscript containing craft practices from 1580s Toulouse. The recently re-designed edition, complete with a plethora of research essays by scholars, artisanal experts, and students, can be found at https://edition640.makingandknowing.org.

In 2020–21, I was the Molina Fellow in the History of Medicine and Allied Sciences at the Huntington Library, where I began developing a new project on the history of distillation. It explores how distillation mediated the interface between the body and the natural world, and how it became an important tool of natural inquiry as well as medical diagnosis and treatment. Combining practices and ideas from natural philosophy, medicine, alchemy, the household, and craft practice, distillation represents an exciting opportunity to think historically about different forms of knowledge.

At the Warburg, I investigate how distillation was depicted in the printed books on the topic that became increasingly popular in the sixteenth century and beyond. How did images of distillation apparatus and process encode the embodied knowledge of skilled artisans? How did people imagine distillation – as a process of material transformation, a model of the workings of the human body, and even of the cosmos?

My work on distillation raises larger questions – about epistemic relationships between technology, the body, and the material world – that I aim to explore in a future interdisciplinary collaboration on “Knowing Bodies in Global History,” bringing together diverse scholarly perspectives on bodies and embodied knowledge.

“Schooling the Eye and Hand: Performative Methods of Research and Pedagogy in the Making and Knowing Project.” Berichte zur Wissenschaftsgeschichte 42 (2020): 323–340. First author, co-authored with Pamela Smith and Tianna Uchacz.