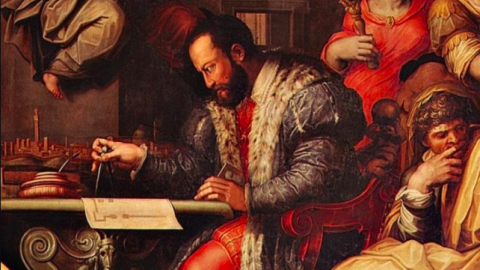 Alessandro Cecchi (Casa Buonarroti): 'Cosimo de’Medici and Giorgio Vasari in the Palazzo Vecchio'
The entry of Giorgio Vasari into the service of Duke Cosimo, in 1554, was due to the ambitious transformation project in Palazzo Ducale of the ancient Palazzo dei Priori, where the Medici had moved in 1540 with his family and court. From that moment the aretino, fresh from the publication of the first edition of the Lives of the Artists (1550), earned the trust of the sovereign and, for over ten years he directed and coordinated great works that changed the face of the building. In December 1565 a grandiose hall, the Cinquecento, served as a sumptuous setting for the celebrations for the wedding of the Prince Regent Francesco with the Archiduchess Giovanna d’Austria.

Antonio Geremicca (University of Liège): 'Brushes, Chisels and Pens. Shared Networks between Arts and Letters in the Cosimo I’s Florence'
Cosimo I de’ Medici played a crucial role in the promotion of arts and letters during the mid-sixteenth century in Florence. The Duke had a genuine interest in them, but he was also aware of their importance for  propaganda and promoted the constitution of the Accademia Fiorentina and Accademia del disegno in celebration of himself and his power. But the two academies were not just the consequence of the Duke’s strategy, but were significant meeting places for writers and artists where solid friendships were formed, founded on cultural and human affinities. This paper will examine some of these relationships, with a focus on Benedetto Varchi. It will also shed light on the positioning of artists, such as Agnolo Bronzino and Benvenuto Cellini, within the humanist network of the city.

Cosimo I de’ Medici (1519-1574), first Grandduke of Tuscany, was both a consummate administrator and a fierce patron of the arts. The lecture series Cosimo I De’Medici and Granducal Florence celebrates the 500th anniversary of Cosimo I de’ Medici’s birth by bringing together scholars from across the humanities to discuss Cosimo’s achievements in art, architecture, statecraft, scholarship and culture. Pairs of scholars will offer specialist discussions over the course of six evenings, from June to November 2019. Evenings will be devoted to issues of diplomacy and spying, architectural and artistic commissions, the development of universities and libraries, as well as Cosimo’s personal learning and self-representation.