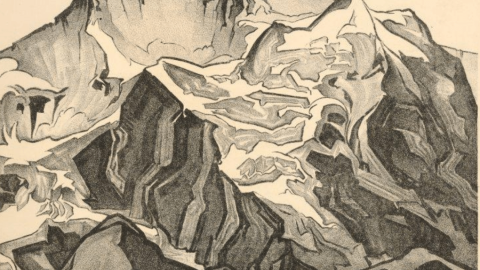 Mountains and Vision in Ancient Literature and Culture Presented by Professor Jason König (University of St. Andrews) Respondent: Veronica della Dora Presented as a keynote address at the 'Image and Ascent: Mountain Terrains in the History of Art' conference.

This lecture examines the role of mountains as objects of vision in ancient Greek and Roman art and literature, and its relationship with their postclassical equivalents.

One of my goals is to challenge narratives that assume a lack of interest in viewing mountains in premodern cultures: there are plenty of ancient examples of mountains appreciated as ‘beautiful’ and subject to rhetorical description; also plenty of features of mountain description that overlap with and even influence modern ideas of the picturesque and the sublime. At the same time I also aim to draw out some of the things that make ancient approaches to mountain vision distinctive and even in some cases alien to modern responses. In particular I draw attention to a recurring interest in viewing mountains as enigmatic objects in need of decipherment. There are numerous examples from ancient visual representations: I look at a series of cases where mountains are presented as miniaturized, symbolic objects, arguing that their presentation in those terms would have enhanced their interest for ancient readers rather than the opposite; also from ancient scientific writing on volcanoes, and from Latin poetry (for example in Horace’s famous Soracte poem, Odes 1.9). Finally, I look at a particular subset of that theme, where clarity of vision in mountain contexts is obscured and drowned out by the mountain’s capacity to impinge upon senses other than sight, particularly the sense of touch, for example in ancient narratives of military campaigning. I argue that those texts are in some cases self-conscious about the tension between two different ways of understanding landscape that have been important for modern scholarship too: landscape viewed with detachment and from a distance, and landscape experienced immersively and corporeally, in the phenomenological tradition.