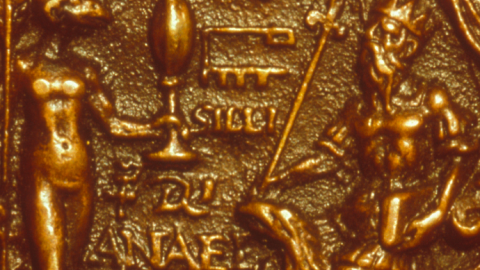 In the second half of the Thirteenth Century, a scholastic debate arose around the possibility for an artificial talismanic image to be endowed with the natural powers of the stars (the so-called "astrological images"). Proponents of such a possibility (foremost among them Albert the Great) defended the idea of "natural magic". But another intellectual current is detectable. Roger Bacon proposes to think of this endowment of artificial figures with celestial powers not in reference to some "natural magic" (since he rejects every kind of magic), but in reference to what could be called a "scientific utopia". This different approach concerned talismanic images as well as the magnetic sphere endowed with perpetual motion imagined by Petrus Peregrinus of Maricourt.

'Stargates - The Magic of Images from Heka to the Monas Hieroglyphica' is a lecture series dedicated to the material aspects of making magical images. Following a chronological sequence in order to underline the transformations, continuities, and discontinuities from ancient to “modern” practices, this series builds on the legacy of the Warburg Institute scholars D.P. Walker and Frances Yates.