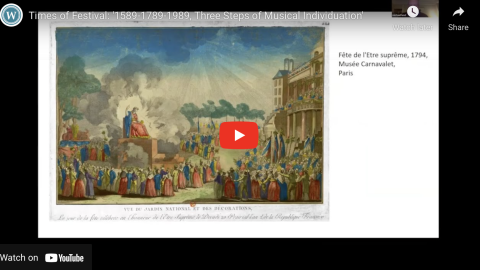 The Medici wedding of 1589, the musical celebrations of the French Revolution in 1789, and performances of Beethoven’s 9th symphony after the fall of the Berlin wall in 1989 were all intended as manifestations of harmony or brotherhood on a universal, national, or global scale. These performances epitomised aesthetic and/or ethical declarations which were, however, not realised. By contrast, music consumption today, which is on an unprecedented scale, mostly reinforces the isolation of the individual listener. If music is not a medium to convey ideals of social cohesion, do we need to accept that in its performance we can at best listen to ourselves?

Michael Fend studied Musicology (with Carl Dahlhaus), German Literature and Philosophy at the TU and FU Berlin. For his PhD he translated and critically commented on Zarlino’s Istitutioni harmoniche in which Zarlino attempted to construct an irrefutable theory of tonality. He further investigated the history of Renaissance pre-rational and symbolic thinking at the Warburg Institute in London, where he had also come to learn English without realising that this would become a lifelong task. In London he pursued a project on non-classical traditions in Opera around 1800 to combat the German-centered historiography of Classical music.

Focussing on Cherubini’s operatic dramaturgies, contemporary aesthetics and on institutional practices he has tried to establish the conditions under which a composer could continue in his métier during the French revolutionary period. Before joining King’s College London in 1993, he taught at the Universities of Aberdeen and Nottingham and was a fellow of the Deutsche Forschungsgemeinschaft, the Society for the Humanities (Cornell University), and of the DAAD at the Maison des sciences de l’homme (Paris). Since 2005 he is also Privatdozent at the University of Bayreuth; in 2005 he was Visiting Professor at the University of Hamburg. In this new lecture series scholars discuss and analyse the temporal dimensions of festivals in Europe and beyond from the perspectives of social history, art history, history of music and literature, and anthropology.