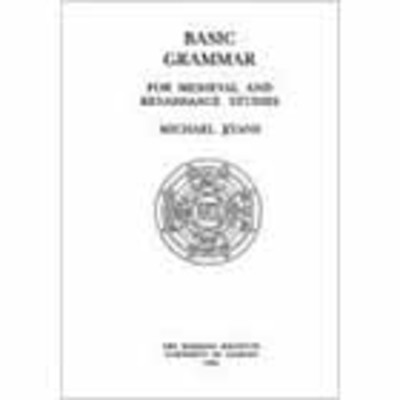 Grammar in this context means Latin grammar. Latin means not the language of Cicero and his Humanist epigones but the dialect of international discourse in pre-modern Europe. Basic means enough grammar to enable the reader to construe utilitarian prose with confidence and a dictionary. The method employed is that in use from the time of the Roman grammarian Priscian (early 16th century) until recently: parsing in a text. The text used here is "Elucidarium", ("The Elucidator") which was a a school-book, in Latin and many vernaculars, until the 16th century. It is a dialogue about God, the Church and the Last Things written by the peripatetic scholar Honorius Augustodunensis at the beginning of the 12th century: the edition published here is based on one made in the 1170s at the Augustinian convent on the Odilienberg in Alsatia. This textbook is divided into 10 parts, each containing 3 lessons. It includes a literal English translation of the Latin, an A to Z of English Grammar for readers unfamiliar with the elements of syntax and accidence, and an index of grammatical terms and a table of conjugations.