Communicating Observations in Early Modern Letters (1500-1675): Epistolography and Epistemology in the Age of the Scientific Revolution 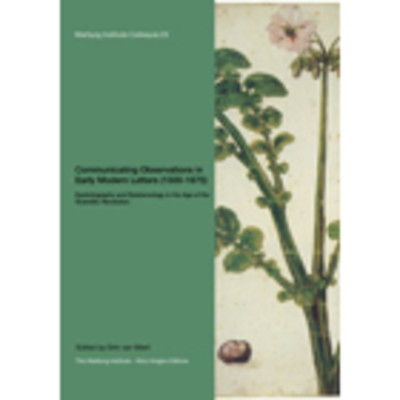 The case studies in this volume juxtapose instances of knowledge exchange across a variety of fields usually studied in isolation: anthropology, medicine, botany, epigraphy, astronomy, geography, philosophy and chronology. In their letters, scientists and scholars tried to come to grips with the often unclear epistemological status of an ‘observation’, a term which covered a wide semantic field, ranging from acts of perceiving to generalized remarks on knowledge. Observations were associated with descriptions, transcriptions, copies, drawings, casts and coordinates, and they frequently took into account the natural, material, linguistic, historical, religious and social contexts. Early modern scholars were well aware of the transformations which knowledge could undergo in the process of being communicated and therefore stressed the need for autopsy, implying faithfulness (fides) and diligence (diligentia), to enhance the authority of observations. It was the specific character of Renaissance epistolography, more than the individual subjects discussed, which shaped the way information circulated. In the course of a correspondence, the narrative in which observations were communicated could be modified by adding implicit or explicit considerations and by relegating lists, drawings or tables containing ‘raw material’ to appendices, which recipients more often than not detached and filed separately. While letters were the prime medium for exchanging information, they have to be studied in relation to notebooks, drafts, attachments and printed works in order to appreciate fully how observations were communicated within the learned networks of Europe during the sixteenth and seventeenth centuries.

Candice Delisle
‘The Spices of Our Art’. Medical Observation in Conrad Gessner’s Letters

Dirk van Miert
Philology and Empiricism: Observation and Description in the Correspondence of Joseph Scaliger (1540–1609)

Adam Mosley
Reading the Heavens: Observation and Interpretation of Astronomical Phenomena in Learned Letters circa 1600

Erik-Jan Bos and Theo Verbeek
Conceiving the Invisible. The Role of Observation and Experiment in Descartes’s Correspondence, 1630–50