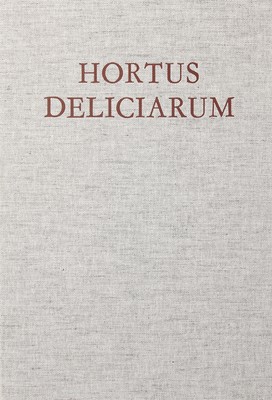 This is the first reconstruction of the Hortus deliciarum, the unique manuscript of which was destroyed in 1870. The text was established from 19th-century transcripts (principally those made for Comte A. De Bastard), from printed sources, and from C. M. Engelhardt’s record of the German glosses as edited by E. Von Steinmeyer. The miniatures are reproduced from the best copies, some in versions previously unpublished. Variants are also included. All the painted copies are reproduced in colour. The reconstruction restores the original sequence of text and illustrations and is intended to replace the obsolete publication of Alexandre Straub and Gustave Keller (1879-99). The edition was prepared under the supervision of Professor Rosalie Green, Director of the Index of Christian Art at Princeton University, who is responsible for the placing of illustrations and text, for the catalogue of the miniatures and for the comparative illustrations. Dr Michael Evans, of the Warburg Institute, and Mlle Christine Bischoff established and ordered the text. Professor Michael Curschmann of Princeton University reconstructed the distribution of the German glosses. The commentary volume includes: Description of the Manuscript and the Reconstruction, by Michael Evans; L’Histoire, par Christine Bischoff; The Miniatures, by Rosalie Green; Le Texte, par Christine Bischoff; The German Glosses, by Michael Curschmann; The Palaeography, by T. Julian Brown; The Musical Notation, by Kenneth Levy; Catalogue of Miniatures, by Rosalie Green.