The Marriage of Philology and Scepticism: Uncertainty and Conjecture in Early Modern Scholarship and Thought 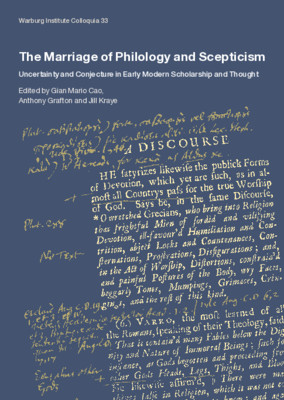 This volume, containing revised and expanded versions of eight papers originally presented at the workshop The Marriage of Philology and Scepticism: Uncertainty and Conjecture in Early Modern Scholarship and Thought held at the Warburg Institute in June 2012, addresses the question of uncertainty in early modern scholarship and thought. The eight papers confront an array of problems, texts, scholars and intellectual contexts, from introductory assessments of the nature of Greek scepticism, particularly in its relation to ancient grammar and medieval thought, to in-depth analyses of the semantic family of uncertainty, as well as of the notion of divination; from case studies of the textual transmission, and relevant editorial problems, of Seneca and Lucretius, to explorations of larger debates in the area of biblical philology, with special attention paid to key figures such as Patrick Young, Richard Bentley and Anthony Collins.

Sextus Empiricus, Child of the Marriage of Philology and Scepticisms
by Glen Most

The Other Philology: Resolving Doubts about Textual Meaning in Early Modern Law and Theology
by Ian Maclean

Divination: Towards the History of a Philological Term
by Anthony Grafton

Coping with Philological Doubt: Sixteenth-Century Approaches to the Text of Seneca
by Jill Kraye

Philology and Scepticism: Early Modern Scholars at Work on the Text of the Bible
by Scott Mandelbrote

"A set of valuable insights about the points of connection and intersection as well as points of divergence between the recovery of ancient texts on the one hand, and the philosophical contents of those texts on the other."
-Bibliotheca Dantesca: Journal of Dante Studies (2021)