The Optics of Ibn Al-Haytham: On Direct Vision Bks.1-3

Author(s)
Ibn Al-Haytham and translated with commentary by Abdelhamid I. Sabra
Series
Studies of the Warburg Institute 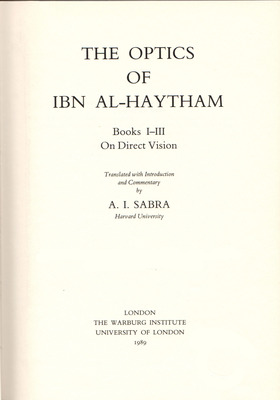 The Kitāb al-manāẓir or Book of Optics of Ibn al-Haytham, composed in the second quarter of the 11th century AD, consists of seven books (or maqālas) which may be divided into two sections: the first is made up of books I-III and treats the rectilinear radiation of light and colour, and vision produced by rectilinear radiation; the second, consisting of books IV-VII, is a study of reflection and refraction of light and of vision produced by reflected and refracted rays. The present work comprises an English translation of and commentary on the first section, following Abdelhamid I. Sabra’s edition of the corresponding Arabic text, published in 1983. A Latin translation of Ibn al-Haytham’s Optics, known as Perspectiva or De aspectibus, exerted profound influence on 13th-century European thinkers and circulated with other optical writings such as Ptolemy’s Optica, which became available in Latin around the same time. The present work includes a concordance of the Arabic and Latin texts as well as glossaries and a manuscript index.