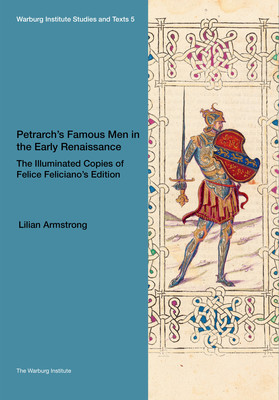 Petrarch (Francesco Petrarca, 1304-1374) worked over many years on his long historical text about the Lives of ancient Roman military heroes, De viris illustribus (On Famous Men). Left unfinished at his death, the text was completed by 1379 by Petrarch’s colleague, Lombardo della Seta. Within a decade, De viris illustribus was translated into Italian; and in 1476 the Libro degli uomini famosi was printed in Poiano outside of Verona by the eccentric humanist and scribe, Felice Feliciano (1433–1479/1480). The edition includes a peculiar feature: preceding each of the Lives is a page on which is printed an interlace woodcut border within which, however, no image appears.

The present book surveys the hand-illumination of twenty surviving copies of Felice’s edition in order to investigate: the Renaissance fascination with the classical past; the artistic traditions of representing Uomini famosi; the technical problems of illustrating books with woodcuts; and the fortuna of the 1476 edition. Two copies contain sequences of heroes painted within the woodcut borders; these heroes provide evidence for reconstructing the appearance of the ‘lost’ frescoes of famous men painted at the end of Petrarch’s lifetime in the Carrara palace in Padua. The hand-illumination of other copies can be assigned to miniaturists working in Venice, Verona, Ferrara, Florence, Rome and elsewhere, suggesting Felice Feliciano’s wide-reaching efforts to market the volume. The importance of studying copy-specific features in Renaissance printed books is further documented by the thirty-two colour plates and over ninety black-and-white figures.