Greek manuscripts in Renaissance Venice: the library of Guillaume Pellicier and its contribution to Europe’s intellectual heritage 2022-2026 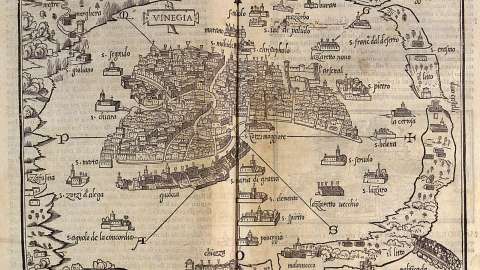 Professor Raphaële Mouren (Senior Research Fellow at the Warburg Institute, Head of Collections at the British School at Rome and Deputy director of the Centre Gabriel Naudé) and Dr Rosa Maria Piccione (University of Turin) have received a research grant from the Arts and Humanities Research Council (AHRC) for a four year project on Greek manuscripts in Renaissance Venice: the library of Guillaume Pellicier and its contribution to Europe’s intellectual heritage. The team includes Dr Richard Gartner, Digital Librarian at the Warburg Institute and a specialist in metadata and digital libraries, as well as two Research Assistants, Drs Dimitrios Skrekas and Elisa Bianchi.

The spread of classical texts from Greece into Italy, and from there to France and other nations, was decisive for the cultural and intellectual innovations of the European Renaissance. Yet the precise practices, relationships, and goals involved in acquiring and organising these works, including the changes brought by the arrival of printing, remain significantly understudied. They can be best understood by detailed examination of specific collections and collectors. In collaboration with the Staatsbibliothek zu Berlin – Preußischer Kulturbesitz and the British Museum, the objective of the project is to reconstruct, contextualise and make accessible the library of Guillaume Pellicier, bishop and ambassador of François Ier in Venice. Mainly composed of Greek manuscripts, copied during his stay in Venice (1539-42) and now for the most part in Berlin, the library documents the survival and organisation of manuscripts copy in the age of printing. We will catalogue, study and analyse the collection and make the records available on the online German catalogue of manuscripts, and on Research Space, the British Museum Cidoc-CRM platform; the manuscripts, digitised by the Staatsbibliothek, will be made available on the digital libraries of the Staatsbibliothek and the Warburg Institute.

The project will expand our knowledge of manuscript production in the age of printing and the creation of libraries in sixteenth-century France and Italy. It will make available hidden material that might support wider scholarship in the field; it will be of value to the work of librarians and metadata specialists; it will create a significant corpus of data and metadata in a variety of interoperable formats for reuse and sharing and will generate a range of publications in several disciplines. Its outputs will be of interest to a large range of non-academic professional audiences as well as the general public.