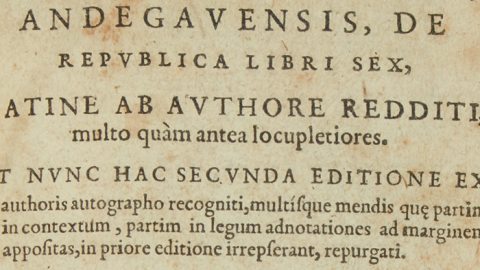 Writing Bilingually is a research project funded by the Leverhulme Trust from January 2023 to March 2026. Led by Dr Sara Miglietti, it aims to create an annotated repertory of prose self-translations printed in Italy and France from 1465 to 1700. The results will be shared through an online database and an open-access annotated repertory, as well as through peer-reviewed publications.

Overview of the project

Early modern Europe was a multilingual world: while Latin was still the lingua franca of international scholarly exchanges, vernacular languages were increasingly being used for both literary and scientific endeavours. Many writers were actively bilingual, switching between languages depending on subject and intended audience. Some went so far as to translate their own works across different languages: usually Latin and a vernacular, sometimes different vernaculars, in rare cases even Greek and Latin.

The activities of these ‘self-translators’ are still poorly understood. Most studies to date have centred around individual case-studies, usually of canonical literary figures. Writing Bilingually takes a more comprehensive approach, examining the full scope of this practice not only among famous literati, but also in the more technical domains of medicine, philosophy, theology, and practical advice. Some of the questions we aim to address include:

Sara is a Senior Lecturer in Cultural and Intellectual History at the Warburg Institute. Educated in Italy, France, and the UK, she specializes in the History of Philosophy, with a focus on Renaissance France. Her interest in self-translation began several years ago while working with Mario Turchetti on a bilingual edition of Jean Bodin’s République / De Republica (Paris: Garnier, 2013-). She has since published several articles on the topic, and is currently working on a book entitled Self-Translation in Renaissance France: Writing Bilingually from Calvin to Descartes.

Marco has received a BA (Hons) in Romance Philology from the Università degli Studi di Milano, and an MA in Cultural and Intellectual History from the Warburg Institute, London. He completed a PhD in Combined Historical Studies at the Warburg Institute in 2018. His broad research interests cover three main areas: historical sociolinguistics and linguistic anthropology of medieval and early modern Italy; the history of Italian and Latin medieval and early modern literature; Italian and European cultural and intellectual history. He is particularly interested in the formation and development of ideas, attitudes and beliefs about language, and how they contributed to the process of formation of national languages known as standardization.

On Writing Bilingually, Marco will be working on a census of self-translations printed in Italy between 1465 and 1700. His tasks will include compiling the database and annotated repertory, identifying and translating materials for the anthology of primary sources, and researching specific aspects of the corpus.

Eugenia was born and educated in Italy. She earned her master’s degree in Philology, Literatures, and History of Antiquity from the University of Turin (2022), and was an Erasmus student at UCL in 2019/2020 and 2022.

Eugenia's work is broadly concerned with Neo-Latin, the reception of ancient languages and cultures, and the evolution of Latin throughout modern ages. Her interest in how the Latin language underwent significant changes in form and meaning depending on the historical period in which it was used, led her to write her bachelor’s dissertation on a Neo-Latin author from the 20th century, Fernando Bandini (1931-2013). Eugenia has a strong interest in the medium of translation and has worked on Bandini’s self-translations, investigating his thought and editing his unpublished Epistula ad Andream Zanzotto poetam. Other interests of hers include the use of the Latin language during the ventennio fascista, the way it was selected and adapted to suit Fascism’s needs, and how it expressed the symbiosis between antiquity, Fascism, and modernism.

On Writing Bilingually, Eugenia will be researching how the theory and practice of self-translation in Renaissance Italy related to contemporaneous language debates (questione della lingua).