Centre for the History of Arabic Studies in Europe (CHASE) 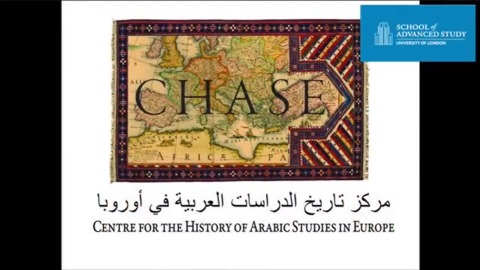 • Continuing project, initiated in 2011 by Dr Jan Loop, Professor Charles Burnett and Professor Alastair Hamilton at the instigation of Professor Peter Mack, and now conjoined with the Encounters with the Orient in Early Modern European Scholarship (EOS) project.

• Objectives: to promote research on the transmission of Arab scientific, philosophical, medical, theological and geographical knowledge from the Middle Ages to the end of the 18th century; to deepen understanding of the historical flow of ideas and knowledge between the Arab world and Europe; to enhance appreciation of the impact of the Muslim/Arab world on the development of European science and civilization.

The image is from an Ottoman miniature showing the meeting in 1556 of John II Sigismund Zapolya of Hungary and the Ottoman Sultan Suleiman the Magnificent.

The Centre for the History of Arabic Studies in Europe (CHASE) is dedicated to the study of the history of European-Arab relations from the Middle Ages to the end of the 18th century.

CHASE is directed by Professor Charles Burnett and Professor Alastair Hamilton. The Centre was established by its first Academic Co-ordinator, Dr Jan Loop.

The Centre for the History of Arabic Studies in Europe (CHASE) is dedicated to the study of the history of European-Arab relations from the Middle Ages to the end of the 18th century.

Closely linked with the Warburg Institute and the unique collections of the Arcadian Library, London, CHASE is a ground breaking institution in this field. It assembles the leading experts in the history of European Arabic studies, whose combined track record is of the highest standard. The objectives of the Centre include the promotion of research on the transmission of Arab scientific, philosophical, medical, theological and geographical knowledge in the Middle Ages and in early modern times; the deepening of our understanding of the historical flow of ideas and knowledge between the Arab world and Europe; and the enhancement of our appreciation of the impact of the Muslim/Arab world on the development of European science and civilization.

The first conference organized by CHASE was on translations of the Qur’an (see below).

CHASE leads the research project Encounters with the Orient in Early Modern European Scholarship (EOS) and is involved in the Ptolemaeus Arabus et Latinus project (further details and links below).

Another project is to establish a number of databases – one mapping the teaching of Arabic throughout Europe, another listing the western editions and translations of Arabic texts, and the third charting the collection of Arabic manuscripts.

As a counterweight to the perceived superiority of Western culture in recent times, the Centre’s research and teaching shows the extent to which Western culture is indebted to developments in the Arab world from the Middle Ages onwards. It will make a fundamental contribution to a better understanding of many of today’s intercultural and interreligious tensions.

By the twelfth century Western scholars were seeking out and translating Arabic texts on astronomy, medicine, mathematics, the natural sciences, metaphysics, alchemy and magic. These works were to have a profound influence on European scientists and philosophers. At the same time Islam was acknowledged as the great rival of Christianity and there was consequently a deep curiosity in the West about its sacred text, the Qur’an, and about the religious precepts of a faith that soon covered an immense geographical area. Western curiosity about the Near and Middle East soon extended to the languages spoken there, and this, in turn, led to an interest in the literature produced in the area. From the 16th century on professorships in Arabic were set up in many European universities. They were attended by the publication of grammars and dictionaries, while Arabic texts were edited and translated. The consequence of this process was an ever greater knowledge not only of the Arabic language but also of Arab history, Islam and the Arabic-speaking Christian communities, and Arabic literature. By the early eighteenth century Europeans were being introduced to Arabic poetry and above all to Arabic story-telling in the shape of one of the most successful works of the time, the Arabian Nights.

Encounters with the Orient in Early Modern European Scholarship (EOS)

CHASE led the research project Encounters with the Orient in Early Modern European Scholarship (EOS). This major, joint research enterprise is funded by HERA (Humanities in the European Research Area) under the Cultural Encounters scheme. It was been awarded nearly €1m over three years from September 2013.

The project documented the scholarly encounter with the Orient between 1580 and 1800: how the exchange of knowledge and of ideas between Europe and the Orient was organised and structured. It followed and compared the conceptual transformations which this encounter has initiated in Biblical studies, the study of religions, in the teaching and learning of Arabic and other Oriental languages, in literature and poetry, and in historical and anthropological thinking.

More on this project can be found here

Astronomical and astrological manuscripts of Claudius Ptolemy - a research project of the Bavarian Academy of the Sciences.

Ptolemy’s world view, encapsulated in his astronomical and astrological works, shaped the understanding of the cosmos for almost 1,500 years. In order to promote Ptolemy’s work the German Joint Federal and State Sciences Conference is supporting the production of an edition of his major works in Arabic and Latin translation, funded from 2013 onwards. The project is supervised by the Bavarian Academy of Sciences under the direction of Professor Dr Dag Nikolaus Hasse, University of Würzburg, who specialises in the history of philosophy and science in the Greek, Arabic and Latin tradition. The project will be funded for 25 years and the work is being carried out by five full-time researchers in Würzburg and Munich. Read the full press release (in German).

This project includes a close partnership with CHASE, taking the form of an exchange programme of PhD students and post-doctoral researchers, co-tutelle supervision of doctoral students and joint organisation of workshops and conferences, some of which takes place at the Warburg Institute.

Reading and Translating the Qur'an with the Dominican Arabists, c. 1240-1320
– by Thomas E. Burman (Tennessee)

The Qur'an in the Enlightenment: Aspects of the Sale Translation – by Ziad Elmarsafy (York)

Reflections of a Qur'an Translator – by Tarif Khalidi (Beirut)