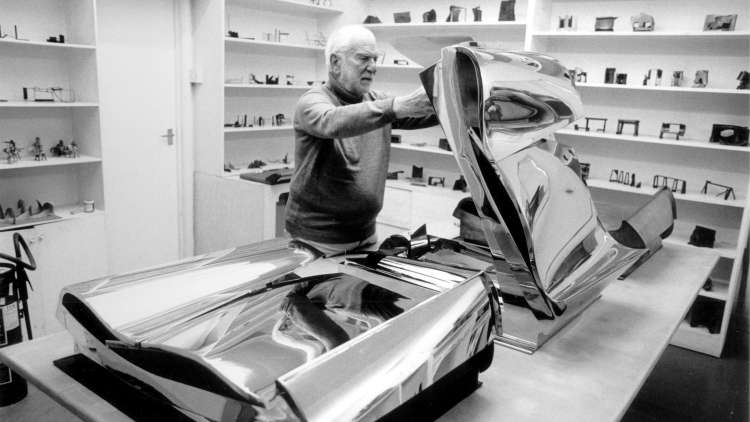 ‘An object whose rhythms recall the sea, whose forms recall the planes of abstract painting and the reliefs of the Italian Renaissance.’ ~ Andrew Dempsey, 2005

At once a book, a poem, an architectural suggestion, and a sculpture, Open Secret nudges the boundaries of clear categorisation, allowing for new connections to be made in each material and discipline. Its fluid form and soft contours matched with hard edges suggest movement, seemingly continually rippling and curving. Caro’s metal editions mimic the form of liquid, reflecting the beginning of their own casting process. Open Secret’s iterations play with light and shade, the polished surface of stainless steel reflecting in some places and the matte card absorbing in others.

‘An object whose rhythms recall the sea, whose forms recall the planes of abstract painting and the reliefs of the Italian Renaissance.’ ~ Andrew Dempsey, 2005

At once a book, a poem, an architectural suggestion, and a sculpture, Open Secret nudges the boundaries of clear categorisation, allowing for new connections to be made in each material and discipline. Its fluid form and soft contours matched with hard edges suggest movement, seemingly continually rippling and curving. Caro’s metal editions mimic the form of liquid, reflecting the beginning of their own casting process. Open Secret’s iterations play with light and shade, the polished surface of stainless steel reflecting in some places and the matte card absorbing in others.

Sir Anthony Caro is one of the most recognized 20th-century abstract sculptors in the world and is credited as one of the most influential British artists of all time. Produced during the last decade of his life, Open Secret is an amalgamation of Caro’s career as a sculptor. Even though he is most notably known for producing free-standing, monumental works often painted in bright colours, such as Promenade from 1996, Caro was also intrigued by the power of smaller-scale sculpture. In particular, the unique challenge they present to appear as complete, unique pieces rather than models of larger works. Caro referred to his smaller-scale pieces as ‘table sculptures’. He began to produce these during the late 1960s after becoming bored “with everything standing on the floor.” Still refusing, however,  to isolate his sculptures by placing them on plinths, Caro dubbed his smaller works ‘table sculptures’ because the viewer would still be able to interact with them as one would with a mug or plate. Furthermore, by permeating their way into the domestic setting, these sculptures exist in a more intimate space than his monumental works. While the purpose of sculpture remained the same: “it is all a discovery of what the body is about,” the smaller works add another layer to Caro’s multifaceted oeuvre.

Evoking a book which is only fully experienced when opened, Open Secret turns the beholder into a participant much like the table sculptures, as they interact with discovering what lies within. Books, specifically those in Henry Moore’s library, played a key role in shaping Caro’s work. In his own words, Moore’s library proved to be “an opening of a new world.” It seems suitable that, as Caro found much inspiration in books, the beholder too should want to find out more about Caro through a sculpture evoking a literary volume.

Beyond looking very different from other works across his oeuvre, Open Secret allowed Caro to approach his craft in a different manner. Throughout his entire career, Caro created his sculptures by first conceptualising a general idea and then beginning to render said idea by putting together bits of material taken from what he referred to as a “pile of pieces”. By combining different pieces together, Caro’s original idea slowly began to take material form until the sculpture told him that it was finished. In the case of Open Secret, according to Anthony Caro’s long-time studio assistant, Partick Cunningham, the artist approached the work very differently because “all the elements had to be made, rolled, curved, and cut.” In other words, Caro created a “pile of pieces” from the imagination which he then fitted together to create Open Secret. Not surprising since, as Caro claimed, “I want to keep challenging myself in doing things that I find difficult.”

Working alongside architects Norman Foster and Frank Gehry at the time, it was suggested to Caro that his sculpture too evoked a piece of architecture. Starting in the late 1980s, Caro became interested in exploring the concept of interior space and sculpture as enclosure. While not interested in the mechanics, Caro stated he would “love to make it into a building…[one where] the whole roof opened.” A black silk cover printed via silkscreen by Nicola Killeen made especially for Open Secret depicts renderings of Caro’s sculptures as buildings placed in different topographies.

The process behind 'Open Secret'

The production of Open Secret was complex and relied upon the work of multiple fabricators. 31 sculptures were made in total using four materials: 3 were made in stainless steel, 3 in grey cardboard, 10 in bronze, and 15 in brass. Caro created an initial prototype from which card templates were then made. These templates were transferred into a drawing, which was subsequently logged into a CAD (Computer-Aided Design) programme. The CAD designs were used as a guide to laser-cut the metal pieces which were then contoured by hand using metal clamps, rollers, and a wooden frame. Once all the elements were properly formed, they were carefully welded together. Each material used by Caro and his team demanded a unique way of working, meaning the metals and cardboard were treated differently throughout the making process. The cardboard sculpture was made by cutting out shapes in card which were then covered and glued with grey paper, in a process similar to wallpapering. As they have a mirror-finish, the brass and steel pieces were acid-etched to darken the surface of curves in shadow. Alternatively, the bronze was abrasively brushed and waxed to retain its patina. As different metals responded uniquely to the welding process, no two pieces are exactly alike. Taking advantage of metal’s inherent malleability, Caro and his team were able to make small changes to the sculptures throughout their creation. However, as a whole, each sculpture uniformly follows the same curving, sloping, concave movement that is at once architectural and organic.

For the literature contained within the works, both Caro and Enzensberger’s handwritten texts were transferred onto a metal plate which was used to print onto the book’s pages using a letterpress. Enzensberger’s poetry was printed in different coloured inks chosen to match the hue of its container. Printed on handmade Japanese paper, the stainless steel book was written in black, the cardboard book was written in silver, and the bronze and brass books contained light brown ink. A complex hydraulic mechanism was designed to hold open the metal editions of the books, a design that remains closely guarded in secrecy to this day.

Each sculpture is wrapped in a silkscreen printed black cloth, created by laying a stencil on a mesh screen and pushing in ink to create an imprint on the surface beneath.

Each of the sculptures contain a portfolio of text and poetry especially selected for Open Secret. The reader can open the book sculpture to reveal the portfolio that neatly slots into a compartment on the underside of Open Secret’s lid. A fragment of a Shakespearean soliloquy and three contemporary poems are printed on handmade Japanese paper and placed within a black paper envelope with the title of the artist’s book handwritten by Caro on its opening page.

One of the texts contained within Open Secret is an excerpt from Shakespeare’s The Merchant of Venice (c.1596-1599). Known as the lyrical poem ‘Tell Me Where is Fancy Bred?’, the text comes from Act 3 Scene 2 within the play. The song expresses notions of where desire truly lies, is it in the heart or the head? Its contents relates directly to the action that is taking place in the  same scene, in which the character of Bassanio faces the challenge of choosing the correct casket of three in order to marry his love, Portia. Her father, Shylock, having left instructions in his Will that the man who chooses the correct casket with his daughter’s portrait held inside wins the right to marry her. Bassanio chooses correctly from three different caskets made of gold, silver, and lead. Choosing the lead casket that contains Portia’s portrait, Bassanio can marry his love. Looking closely at the text, the first rhyming couplet gives a subtle indication by its rhyme that lead is the correct casket for Bassanio to select.

The three different materials used for the caskets are echoed in Caro's use of bronze, brass, stainless steel, and cardboard for Open Secret. Each of the sculptures containing writings within may also allude to the portrait within the lead casket.

Joining Caro’s handwritten excerpt from The Merchant of Venice, are three poems by Hans Magnus Enzensberger. The artist had worked in collaboration with the German poet in a piece titled Last Judgement Sculpture from 1995-1999. Enzensberger was commissioned to write poetry to accompany the sculpture and collaborated with Caro once again for Open Secret in 2004. Three poems are contained within the work, entitled Astronomical Sunday Sermon, Yellows Stars and Fish Knives and Ideas. Each have been handwritten and translated into English by the poet, then transferred onto a plate and printed in different colour inks. The poem engages with the celestial and temporal by employing evocative language and imagery, while more broadly relating to themes on the passage of time, universal human existence, and the relationship between humanity and nature.

Although the poems are not intended to be in visual dialogue with Caro’s sculptures, they engage with the book’s broader form and mobility.

​​Speaking in an interview in 2015, Enzensberger described  poetry as the most economical form of writing: ‘with just one page you can write a poem’. The poet uses the metaphor of an onion to describe the layers of meaning one can draw out from such poetry – the first layer being one that everyone can understand while those who look closer can peel away that thick layer, revealing the next underneath. We may read Open Secret in a similar light, not only because of its literal hidden mechanisms, but also to the oscillation between familiar and unfamiliar with regard to its form, which evoke a book.

Portfolio: Excerpt from Shakespeare's The Merchant of Venice and Poems by Hans Magnus Enzensberger